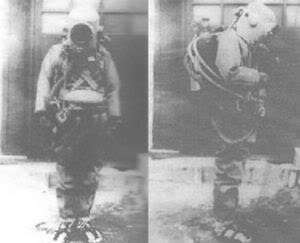 Suicide divers (Fukuryu "Crouching dragons") were a part of the Special Attack Units prepared to resist the invasion of the Home islands by Allied forces. They were armed with a mine containing 15 kilograms of explosive, fitted to a 5 meter bamboo pole. They would dive and stick the pole into the hull of an enemy ship, destroying themselves in the process. They were equipped with a diving jacket and trousers, diving shoes, and a diving helmet fixed by four bolts. They were typically weighed down with 9 kg of lead, and had two bottles of compressed air at 150 bars. They were expected to be able to walk at a depth of 5 to 7 meters, for about 6 hours.

It was estimated that the mass onslaught would destroy some 35–50 per cent of the Allied armada before any troops could be put ashore. Offshore, a last line of maritime defence would be provided by the least-known of the “special attack” forces: the demolition frogmen called fukuryu (“crouching dragons”).

Their training had begun at Kawatana in November 1944 (see here), although the IJN had employed teams of swimmers on hazardous missions since early in the war; notably at Hong Kong, where skindivers defuzed Allied mines to prepare a way for landing craft. A Japanese prisoner taken at Peleliu, Palaus, late in 1944, claimed that he belonged to a 22-strong Kaiyu unit of swimmers trained to attack landing craft. Each swimmer was armed with three grenades, a knife and a simple demolition charge: a wooden box of c.160in3 (2620cm3) packed with trinitrophenol (Lyddite) with a fuze cut to the required length. But the kaiyu units, credited with damaging an LCI in the Palaus and a DE and an attack transport at Okinawa, were surface swimmers rather than frogmen.

The fukuryu appear never to have been deployed outside the home islands. Their role in the final defence would have been suicidal – as was, to some extent, their training. Their equipment – a loosely-fitting wet suit; a clumsy helmet not unlike that of a deep-sea diver; bulky air circulation and purification tanks strapped to chest and back and linked by a tangle of hoses – was most unsatisfactory. “There were very many [fatal] accidents during the training of fukuryu”, a Japanese veteran told me, “because the twin-tank oxygen re-breathing equipment was no good – but nothing better was available”. Nevertheless, some 1,200 fukuryu graduated from Kawatana and Yokosuka Mine School by the war’s end, when 2,800 were still in training.

To destroy inshore landing craft, each fukuryu was armed with a 22lb (10kg) impact-fuzed charge, incorporating a flotation tank, mounted on a stout pole (much like the anti-tank “lunge mine” described above). If his equipment functioned perfectly, the frogman could stay at an optimum depth of 50ft (15m) for up to 10 hours, sustained by a container of liquid food. Construction was begun of underwater pillboxes, concrete with steel doors, in which fukuryu would shelter from a pre-landing bombardment while awaiting their opportunity to sally forth and thrust their explosive lances against the bottoms of landing craft.

The fukuryu would form part of a network of beach defence. Farthest from the beach were moored mines, electrically detonated from ashore; then three lines of fukuryu deployed so that each man guarded an area of c.470sq yds (390sq m); then lines of magnetic mines; and finally beach mines. Capt K. Shintani, commanding the fukuryu, was somewhat optimistic in hoping that his men might “cause as much damage as the kamikaze aircraft”.
Posted by Mitch Williamson at 5:21 AM